I ran across a site that discussed this dream as it relates to Saint John Paul II call for a New Springtime in the church.

To contemplate the face of Christ, and to contemplate it with Mary, is the ‘programme’ which I have set before the Church at the dawn of the third millennium…to contemplate Christ…above all in the living sacrament of His Body and His Blood

At the Missionaries of Our Mother of the Eucharist site it continues: During this time in which we live, the Church is in a state of great chaos and upheaval. Our late “Totus Tuus” Pope, John Paul II, has clearly steered the “Bark of Peter”, the Church, between the two pillars of the Eucharist and Mary to anchor on. 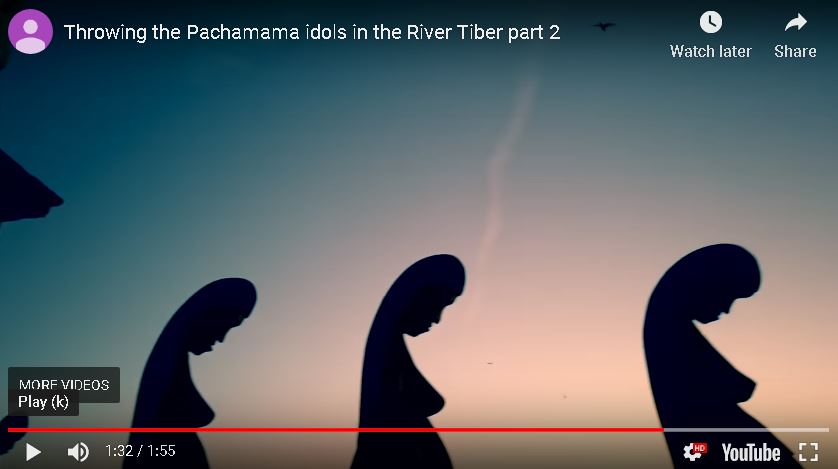 There will be chaos in the Church. Tranquility will not return until the Pope succeeds in anchoring the boat of Peter between the twin pillars of Eucharistic devotion and devotion to Our Lady.

The Pope stands at the helm and all his energies are directed to steering the ship towards those two columns from whose summits hang many anchors and strong hooks linked to chains.

In the Blue Book “To The Priests, Our Lady’s Beloved Sons” our Blessed Mother made some very controversial prophecies about the Jubilee Year of 2000.

Pray, to obtain from the Lord, through the maternal mediation of my Immaculate Heart, the graces of which you have need in these conclusive days of the purification and the great tribulation. With this coming year, enter into the time of immediate preparation for the great jubilee of the year 2000. This special preparation which the Pope is urging of you through his apostolic letter, ‘Tertio Millenio Adveniente,’ is to make you understand that this date is important and significant for the Church and for all humanity. This date should be particularly significant for you, because I have previously announced to you, for that date, the triumph of my Immaculate Heart in the world.

Imagine everyone’s surprise when the year 2000 came and went without an ‘immediate’ Triumph of Her Immaculate Heart.

In Saint John Bosco’s dream, after the pope starts the process to guide the ship to the two columns.

Suddenly the Pope falls gravely wounded. Immediately, those who are with him run to help him and they lift him up.

Pope John Paul II was elected in October 1978.  His devotion to Jesus and Mary was felt across the globe.  His attempted assassination was on May 13th, 1981.  The anniversary of the first Fatima apparition of our Blessed Mother.  According to https://vatican.com/The-Jubilee-Year/  – Pope John Paul II designated the year 2000 as the Great Jubilee.

According to http://ourmotheroftheeucharist.org/1607/ “And what a great grace of mercy did indeed occur during the Great Jubilee!

In these events is seen another triumph of the Immaculate Heart of Mary by the fact that the whole Church has, in a special way, reaffirmed the importance of the message of Fatima and the consecration to Our Lady.

The Blue Book contains some true treasures our Holy Mother has left us. There is a website with additional pamphlets and literature on Marian Movement of Priests.

As a closing thought, the commentary found at http://mgr.org/BoscoDream.html provides some insight into our own actions as we ponder the state of the church and the state of society in our times.

In many prophetic dreams of Don Bosco, he is given a view of “Now” and a view of “What it should be like in the future”. With such information or action plan given to him by Heaven, Don Bosco “rolls up his sleeves” and gets to work toward the goal pointed out by Heaven in the Prophetic Dream.